Dedicated attention
from the experts.

[I signed up for some tutoring sessions and the effect was immediate.] 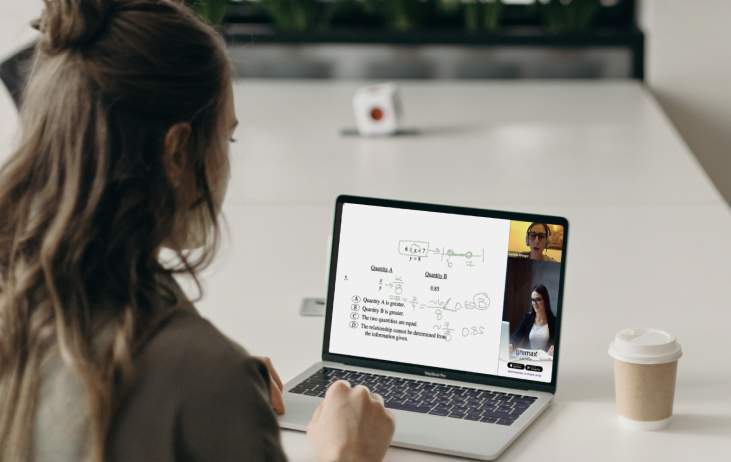 Engage in free live office hours with our instructors.

Sign up to get notified when we are hosting free live office hours covering a wide range of GRE topics.

Common Questions
About the GRE.

When are the GRE test dates?
What's the GRE format?
Can the GRE be taken online?
How is the GRE scored and percentile calculated?
How are GRE scores Reported?
Can GRE scores be combined?
How many times can you take the GRE?

When are the GRE test dates?

The entire test takes 3 hours and 45 minutes including break times.

The computerized edition of the GRE also includes an "unscored" or "research" section.

Can the GRE be taken online?

The computer-administered version of the GRE cannot be taken online from a personal computer.

This version of the GRE must be taken at a GRE test center.

How is the GRE scored and percentile calculated?

GRE scores range from 130 to 170 for the verbal reasoning and quantitative reasoning sections, respectively.

The percentile ranks for scores are calculated based on the performance of all test takers and indicates the percentage of test-takers who scored lower than the given test score.

How are GRE scores Reported?

After the day of the test, you may also opt to select any other test scores from the past five years to send to the graduate schools or fellowship programs you have chosen.

All score reports are sent directly from the administrator of the GRE—ETS—to the selected recipient. Official scores are available for reporting 10-15 days after a computerized test and five weeks or so after a paper test.

Can GRE scores be combined?

No, GRE scores from different test dates cannot be combined.

How many times can you take the GRE?