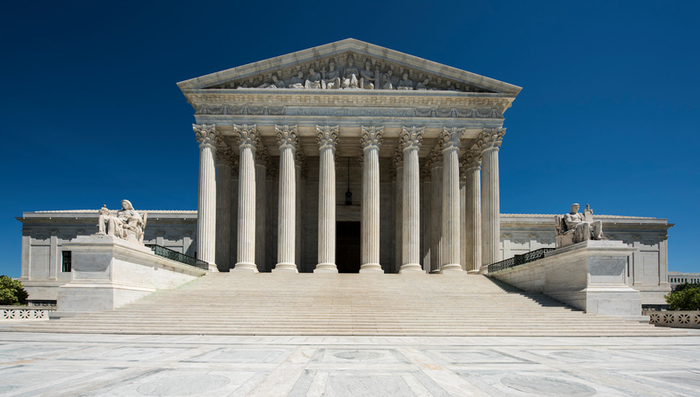 Every law is up for interpretation, which is the role of the judicial branch of our government (i.e. the judicial branch interprets the meaning of laws). The United States is a common law system, which means that holdings from previous court cases establish legal precedents that will be applied in future cases. For this reason, as a law student, you’ll be studying plenty of court cases.

The Supreme Court is the highest court in the United States, so its decisions are binding precedent not only for the lower federal courts but also for state courts.

Before starting 1L, you should know about some of these historic cases and the precedents they set:

This Supreme Court case began in 1984, when Texas resident Gregory Lee Johnson burned an American flag outside the 1984 Republican National Convention to protest the nomination of Ronald Reagan. Texas police arrested and charged Johnson with the desecration of a venerated object. Johnson appealed his conviction, arguing that flag burning was a form of symbolic speech, protected by the First Amendment’s guarantee of free speech. Johnson’s case went all the way to the Supreme Court, where the Justices ruled in his favor 5-4 on June 21, 1989. The Supreme Court decided that flag burning was indeed a form of symbolic speech protected under the First Amendment, writing in its decision that the government could not prevent the “expression of an idea simply because society finds the idea itself offensive or disagreeable.”

The Second Amendment had been widely debated for decades, with two camps at odds over the amendment’s language and meaning. Some argue that the Founding Fathers only intended to give people the right to bear arms in the context of a militia that rises up against a tyrannical government—the way the American colonies rose up against Great Britain—while others have interpreted the amendment as a blanket allowance for all individuals to own guns, regardless of military service. When Washington D.C. resident Dick Heller was denied an application for a license to possess a handgun, he challenged DC’s strict gun control laws, and in 2008 the Supreme Court ruled in his favor 5 to 4. They argued that the Second Amendment gives individuals the right to own guns outside of military service. In the decision, Justice Antonin Scalia wrote, "We hold that the District's ban on handgun possession in the home violates the Second Amendment, as does its prohibition against rendering any lawful firearm in the home operable for the purpose of immediate self-defense . . . [The Second Amendment] surely elevates above all other interests the right of law-abiding, responsible citizens to use arms in defense of hearth and home.”

Precedent Set: A state can deny unemployment benefits to a worker fired for using illegal drugs, even if used in a religious ceremony.

This 1990 Supreme Court case began when two Native American men working in Oregon were fired for using peyote after failing a drug test. Even though they’d used it in a religious ceremony, peyote was still an illegal drug. The men filed for unemployment benefits, but the state of Oregon denied their request, citing the drug use exception to the state’s requirement to provide unemployment benefits. The case reached the Supreme Court, and the Justices voted in favor of the state. In his opinion, Justice Antonin Scalia argued that allowing exceptions to laws on religious grounds “would open the prospect of constitutionally required exemptions from civic obligations of almost every conceivable kind,” like paying taxes or fulfilling vaccination requirements.

Before its football games, a Santa Fe public school student led prayers for the team and those gathered. But did this violate the Establishment Clause of the First Amendment, which prohibits the government from establishing an official religion? Yes, according to the Supreme Court’s ruling on June 19, 2000. The football games were official school events, part of the public educational system, and attendance was mandatory for members of the team, band, cheerleaders, etc. The Supreme Court ruled that it would be illegal for the state to make these students choose between attending the required event and being subjected to prayers they may find personally offensive. Per the court, public schools have no business promoting any specific religion, and this case emphasized the importance of a separation between church and state.

Precedent Set: A woman’s right to an abortion falls within the right to privacy protected by the Fourteenth Amendment.

Jane Roe, a resident of Texas, wanted to terminate her pregnancy by abortion so she brought an action to invalidate a Texas law that prohibited abortions except to save the pregnant woman’s life. The Court divided the pregnancy into three trimesters and held that during the first trimester, the decision to terminate the pregnancy was solely at the discretion of the mother. During the second trimester, the state could regulate but not outlaw abortions in the interest of the mother’s health and, after the second trimester, when the fetus becomes viable, the state can regulate or outlaw abortions in the interest of potential life except when the abortion is necessary to preserve the life or health of the mother.

Interested in learning about more cases? Subscribe to 1L for case briefs of the cases you will likely encounter during your first year of law school.