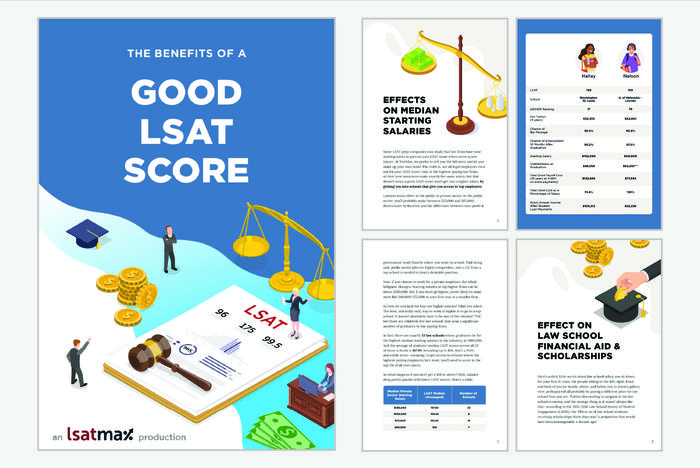 Future law students, especially those who intend to practice in the private sector: you know your LSAT score is the single most important quantitative aspect of your law school applications, but you probably don’t realize how profoundly the LSAT affects your financial future. The new LSATMax white paper, Benefits of a Good LSAT Score, is a must-read for anyone considering attending law school.

Based on findings from ABA disclosures and the Law School Survey of Student Engagement, the white paper examines your LSAT score’s effect on your future earnings, debt burden, and the cost of a legal education in three ways:

Whether or not you’re a fan of the LSAT—and unless you’re among the roughly 1% of students who find obtaining a high LSAT score easy, you probably aren’t—the white paper makes clear that no test-taker can afford to do less than their best. Not only will a subpar LSAT score hold you back from attending the schools that send the most students to high-paying employers, it could affect you for the rest of your career, as you take on more debt and receive a lower first-year salary than peers with higher LSAT scores.

A handful of law schools have eliminated all merit scholarships, instead distributing financial aid solely on the basis of need. These schools, however, are mostly high-ranking and selective, meaning lower scorers are unlikely to be admitted at all. Students with lower LSAT scores are left in a vicious double-bind, rejected from higher-ranking law schools and overcharged at lower-ranking law schools.

Did you know that 90% of students with LSAT scores between 166 and 180 will receive merit scholarships, compared to only 16% of those with an LSAT score below 140? That huge differential holds even at schools known for their generosity. For instance, Washington University in St. Louis (ranked 17th by USNWR) offer at least half-tuition scholarships to nearly 80% of incoming students.

Earnings, debt, and scholarship data show students who score around the 50th LSAT percentile (151-152) are left hamstrung financially if they choose to attend law school, while those below the 50th percentile may be unable to attend at all. This tracks with the conventional wisdom that students unable to gain admission to a top law school should choose a different career path. Yet, every admissions season, thousands of passionate future lawyers choose to take on crushing debt at lower-ranking law schools.

So what’s the path forward? Well, as the white paper makes clear, it’s worth spending time and money improving your LSAT score before applying to law school—in fact, their hypothetical case study suggests the value of a single LSAT point may be as much as $7,000 in the first year of private sector employment.

Compare that to the cost of LSAT prep with LSATMax: as little as $749.99 for lifetime access to a self-paced online LSAT course, and as little as $33.33 per hour for semi-private tutoring when you split sessions with three fellow students. If you don’t improve your LSAT score after completing the LSATMax digital course, you’ll receive a full refund.

The full LSATMax white paper on the financial benefits of LSAT success is available to download completely free. In today’s contracting economy, with future lawyers facing the choice between paying full tuition for Zoom-based legal education or delaying law school entirely, it’s critical that prospective law students obtain as much information as possible before attending.

Law school has long been perceived by those outside the legal field as a ticket to professional success. Meanwhile, lawyers and legal publications have sounded the alarm: opportunities for new lawyers are decreasing, while the cost of law school continues to rise. Yet, those genuinely called to the legal profession by a passion for justice are needed more than ever. In a world confronting old societal problems, new technological phenomena, and a rapidly-changing climate, expert advocacy will be much-needed in many arenas.

Still, even the most values-driven lawyers hope to earn a living—especially after investing three years and six figures just to enter the profession. And now that most law schools discount their tuition for high LSAT scorers, competitive intelligence on the dollar value of a high LSAT score is a secret weapon for thrifty applicants.

Simply fill out the form below to download the free white paper: