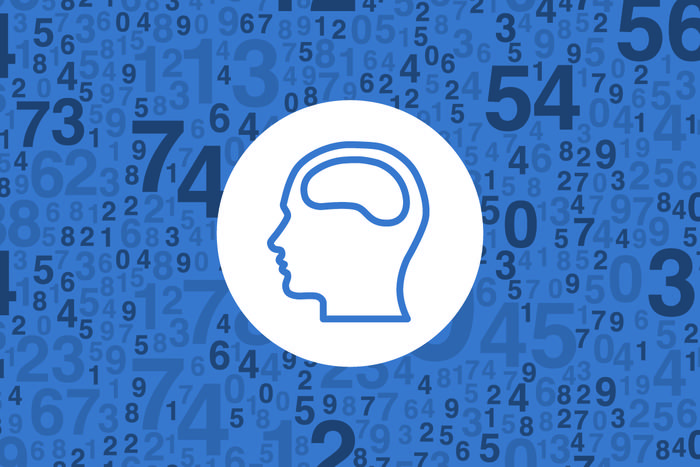 Starting the LSAT study process can be daunting. Maybe you picked up a few heavy study books — ones that could only be described as tomes. You begin to fret about how you'll progress through pages upon pages of materials. Or, perhaps, you're starting an online study course. As you scroll through all the lesson videos, homework sets, and practice exams, you begin to worry about just how many concepts the LSAT must cover. These experiences have been known to overwhelm even the sturdiest pre-lawyers.

Things can be especially worrisome if you're trying to progress through your studies in only a few months or if you're — like most of us must — balancing your studies with a full slate of classes, work, or general life responsibilities. In the limited time you can dedicate to the LSAT, how can you acquire the understanding and skills necessary to unlock an LSAT score that will make you a competitive applicant at the law school of your choice?

Of course, there are many ways to prepare for the LSAT, so none of those answers are necessarily wrong. And if you're looking for sound advice of that variety, we have a few recommendations we can share.

But, ultimately, the smartest way to prepare for the LSAT is to develop an informed approach that works best for you — your schedule, your study habits, and your learning style. We can't speak to those last points as well as you can.

But we can inform you. And that's what this series of blog posts is going to do. We'll tell you exactly what the LSAT tests and how often those concepts appear on each test. In doing so, we may even dispel some misconceptions or outdated beliefs about the LSAT you may have heard. After all, the LSAT is an evolving test. What it tested most prevalently in the 90s or early 2000s is not necessarily what it's testing most often now.

So we'll run through the concepts tested on the LSAT and let you know how often those concepts appear in the most recent tests. To combat those feelings of overwhelm that those lengthy study books or online course modules can provide, we won't go over every individual question type on the LSAT. Instead, we'll group question types by the concepts they most prominently test. This way, when you begin to devise your study plan, you can make an informed decision on how much time you plan to dedicate to each important concept.

So, enough preamble — time is of the essence, especially if you're studying for the next LSAT. Today's post will dive into the Logical Reasoning section, which accounts for one-third of the scored questions on the LSAT. 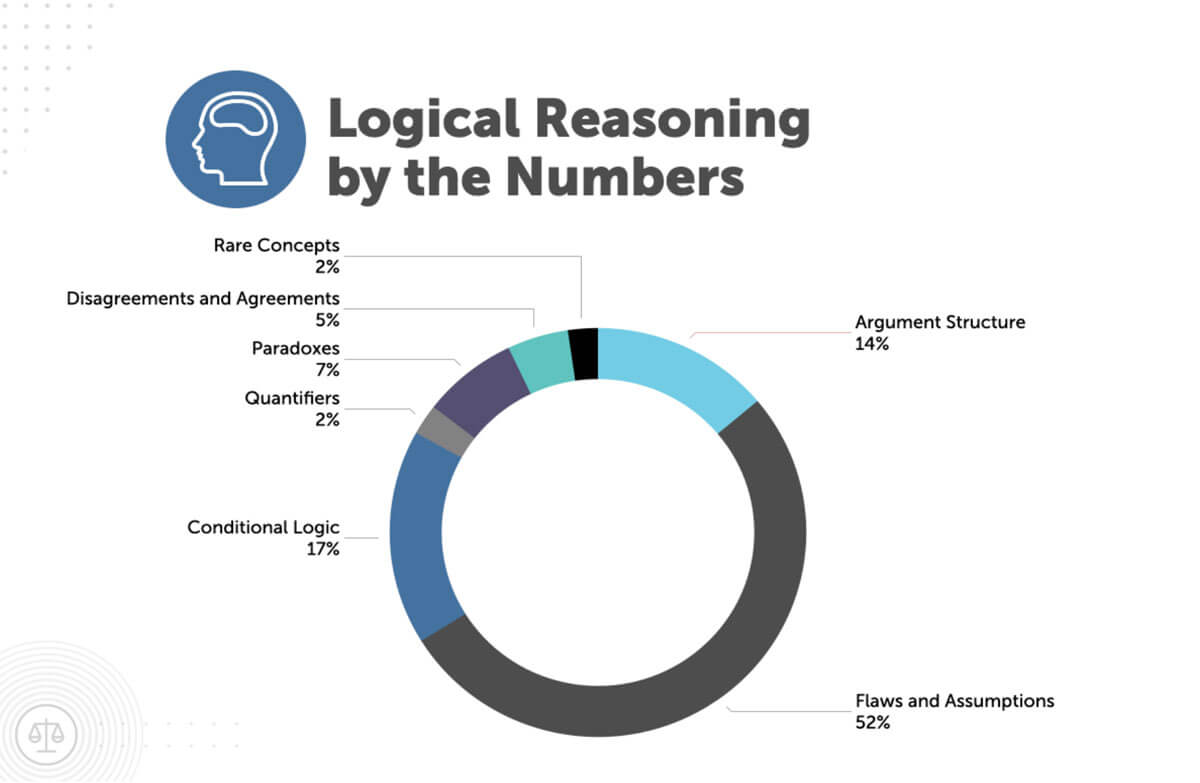 For the uninitiated, the Logical Reasoning section features 25 or 26 questions. These questions feature a short paragraph, a question about that paragraph, and five answer choices. The paragraph will either be a set of facts (in which case the question will typically ask you to draw a conclusion from those facts or resolve a paradox within those facts) or an argument (in which case the question will ask you to deconstruct, evaluate, or change that argument). To help you visualize, here's a more or less randomly selected Logical Reasoning question: 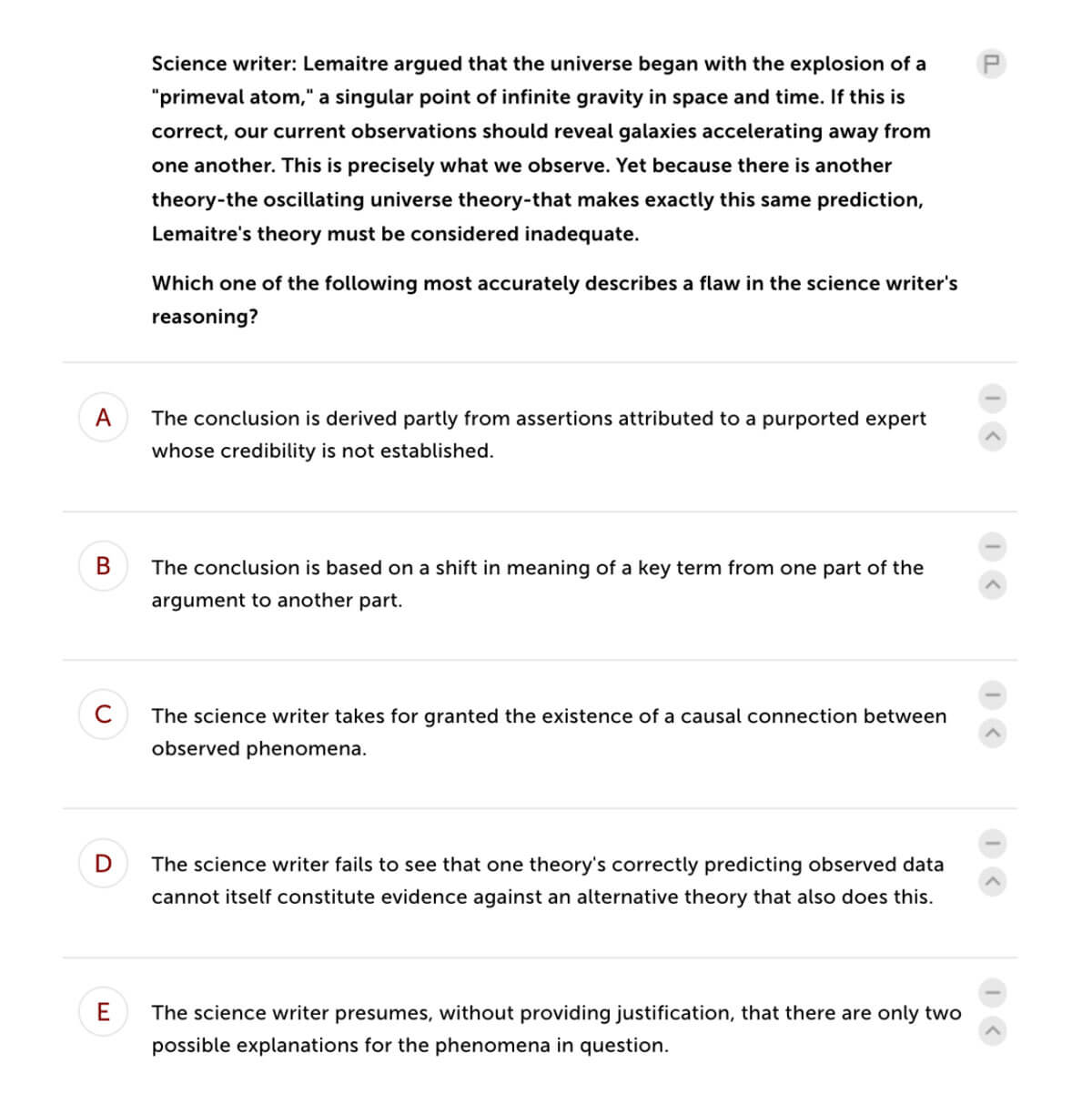 (For those curious, the correct answer is D)

13.89% of Logical Reasoning questions
Expect about 4 questions on an LSAT

This section groups together questions that ask us how an arguer uses evidence to support a conclusion. Now, this is a skill that you’ll have to employ on a whole lot more than these four types of questions. Roughly 75% of all Logical Reasoning questions feature arguments, and you’ll need to understand the argument’s structure on all of those questions.

What separates this group of question types is that understanding the argument’s structure is the whole point of these questions. Understanding the argument’s structure will also be a whole lot more difficult on these question types. You probably won’t need much help identifying a conclusion on, for example, a Strengthen question. But you probably will need to develop that skill to identify the conclusion on a Main Point question. Once you develop a mastery of this skill, you can expect to earn 4 points on the LSAT.

52.27% of Logical Reasoning questions
Expect about 13 questions on an LSAT

And this section is a whopper. Over half of your Logical Reasoning score (about a sixth of your LSAT score) will be determined by your ability to identify flaws and assumptions in an argument. Any smart study plan will make this a priority. If you need some help developing a simple, intuitive method to identify flaws and assumptions, consider this webinar.

Of course, there are many flaws that an argument could conceivably commit. But if your time is limited and you want to focus on the most prevalent, consider dedicating time to "equivocation" flaws (which appear on about 11.57% of Logical Reasoning questions), "causation" flaws (8.45%), "comparison" flaws (7.52%), and "exclusivity" flaws (6.83%).

17.01% of Logical Reasoning questions
Expect about 4 questions on an LSAT

This section also allows us to discuss the first misconception or outdated belief you may have heard from other sources of LSAT info. Many test-prep sources still assert that this is one of, if not the most, important concept to learn for the LSAT. Hopefully, comparing this to the Flaws and Assumptions sections above will help you realize that this statement isn't even close to being true.

Why does that belief persist? The Logical Reasoning section used to be a much more important part of the exam. There used to be two scored LR sections, meaning that conditional logic was once twice as important as it currently is. Additionally, conditional logic was once a much more prevalent concept within each Logical Reasoning section. The official LSATs from the 1990s and early 2000s featured many more questions that involved conditional logic than the most recent exams. For whatever reason, the test-writers don't want to test this concept as heavily now.

To be fair to the conditional logic truthers, this concept appears on Logical Reasoning and Logic Games, boosting its relevance to your study plan. And, don't get me wrong, it's worth learning this concept! It still will contribute to about four questions per exam. And you may run into a test — like Prep Test 82— where 22% of the LR questions involve conditional logic. It will take time to become comfortable with this concept, but with persistence, it can become second nature. Then, you can welcome the chance to flex these skills whenever possible.

But many study plans overestimate this concept's importance on the LSAT. And these plans focus on intricate syllogisms that are rarely tested anymore. This can frustrate new learners and waste valuable time. If you want a quick primer on just the basics of conditional logic — everything you need to know for recent LSATs — check out this webinar.

2.43% of Logical Reasoning questions
Expect about 0 or 1 questions on an LSAT

Like conditional logic, quantifiers are another concept that occasionally appears on some question types. Some study plans dedicate an inordinate amount of time to quantifiers. That's unfortunate since this concept is difficult for many learners and probably won't yield them many points on the LSAT. Even if you acquired an expert-level understanding of quantifiers, you might not get to employ that skill on your test. For this reason, a compressed study plan might be wise to skip over the time-consuming concept altogether.

7.41% of Logical Reasoning questions
Expect about 2 questions on an LSAT

The idea of taking two competing facts and making them agreeable is intuitive for some but not others. If you find that you miss a number of these questions on your early diagnostic exams, it's a good idea to find or develop an approach to this concept and get lots of practice employing this skill.

4.75% of Logical Reasoning questions
Expect about 1 or 2 questions on an LSAT

This is another concept that tends to get short shrift from study plans. These questions require us to identify what two speakers agree or disagree over. It's not the most difficult of concepts for most learners, but it's worth getting some practice with this skill. There's also a surprising amount of volatility with these questions. They appear, on average, once or twice per Logical Reasoning section, but some sections will feature three or four of these.

2.32% of Logical Reasoning questions
Expect about 0 or 1 questions on an LSAT

We're only compiling these skills together because they make such rare appearances on the LSAT. "Falsification" questions will ask you to take a set of facts and determine what can't be true. "Generalization" questions ask you to draw a broad conclusion from a single example. And "misinterpretation" questions ask you what one person misinterpreted in another's argument. As the name "Rare Concept" may suggest, you don't need to dedicate much time to learning this material. Indeed, if your study time is limited, these might be the first question types you choose to elide completely.

So, those are data. Use those facts wisely in forming your study plan, and stay tuned for our next posts on Reading Comp and Logic Games by the numbers.