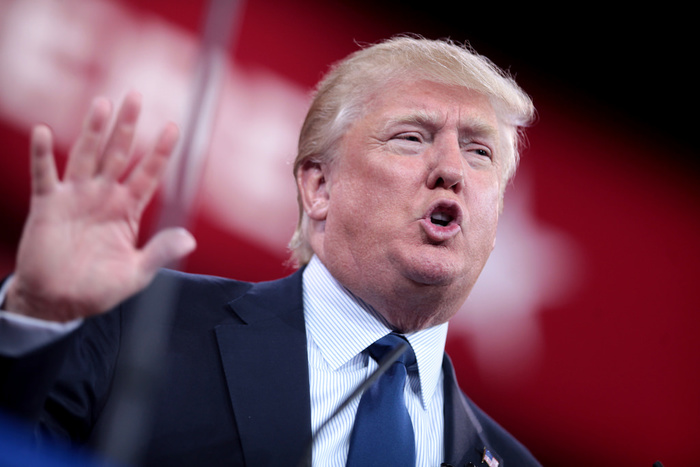 "If she gets to pick her judges," Trump said, "nothing you can do, folks."

But then he added: "Although the Second Amendment people, maybe there is, I don't know."


Trump's incoherent rambling ignited a firestorm of public controversy. The New York Times wrote: "Oblique as it was, Mr. Trump's remark quickly elicited a wave of condemnation from Democrats, gun control advocates and others, who accused him of suggesting violence against Mrs. Clinton or liberal jurists."

In the aftermath, a lot of people are wondering: were Trump's comments protected under the First Amendment? Given that the First Amendment is a frequent topic on the bar exam, we figured we should capitalize on this controversy by examining it from the perspective of your bar exam review.

So let's get started, using the BarMax Con Law outline checklist as our guide.

First, we need to examine whether the speech in question is protected. Although the First Amendment provides "Congress shall make no law…abridging the freedom of speech," it only applies to protected speech.

What kinds of speech are not protected by the First Amendment?

Is Donald Trump, as the presidential candidate for a major political party, a government official? No; not yet or never (depending on who you ask).

A true threat is a threatening communication that can be prosecuted under the law. As the name suggests, a true threat is distinct from a threat that is made in jest.

The Supreme Court has held that true threats are not protected under the First Amendment based on three justifications:

Many people are definitely fearful of Trump (or at the very least some of his policies), and his comments are disruptive, but they're also so incoherent that it's unclear whether there's ever a likelihood that any threatened violence would ever actually occur.

Brandenburg actually sets a high bar. For speech to be unprotected by the First Amendment under an incitement theory, that speech must cause imminent lawbreaking. Imminence is defined as "likely to occur at any moment" or "impending."

The tricky question here is whether Trump's (again: fairly incoherent) comments satisfy this high bar—and the answer is they probably do not. Most likely, a court reviewing the incident would not conclude that Trump's comments amounted to incitement.

Defamation refers to the act of damaging someone's good reputation. Libel is a written or published defamatory statement, while slander is spoken aloud. Trump's Second Amendment comments were not aimed at damaging Ms. Clinton's reputation. Defamation doctrine does not apply.

Even though defamation is not applicable here, let's not forget the First Amendment issues that would arise since Trump's comments referred to a public figure, i.e. Hillary Clinton. In addition to the normal requirements for defamation, Ms. Clinton would have to show (1) that the defamation is false and (2) malice by Mr. Trump.

(Interestingly, the über-thin-skinned Donald has threatened to "open up libel law" if elected. However, experts have pointed out that there is no federal libel law to "open up.")

In Miller, the Supreme Court set out a test for obscenity that was not protected by the First Amendment. Under that test, speech is considered obscene if it describes or depicts sexual conduct that:

Trump's Second Amendment ramblings did not touch on sex at all, so obscenity doctrine is irrelevant too.

We all know Donald Trump is selling something: Donald Trump. Nevertheless, his political campaign is not technically classifiable as commercial speech.

OK. So Trumps Comments Are Not Unprotected Speech. Is there a First Amendment Problem?

No. Why? Because there is no state action to censor or otherwise limit Trump's speaking.

To sum up: looks like Trump's comments about Ms. Clinton pass constitutional muster. We'll leave the separate question of whether Trump could be prosecuted for his comments (see 18 U.S.C. § 879) for another day, since that's not something you need to worry about for your bar exam prep.

But we will note that 18 U.S.C. § 879 is a content-based restriction on speech, although clearly one that would pass strict scrutiny.