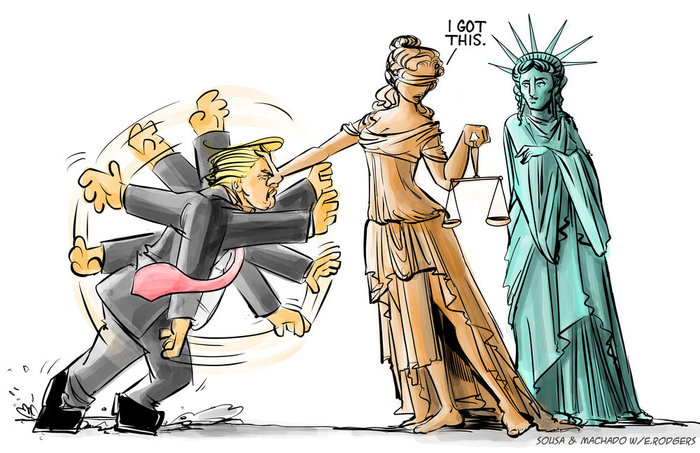 President Trump’s Executive Order 13769, “Protecting the Nation From Foreign Terrorist Entry Into the United States,” which, among other changes to immigration policies and procedures, bans for 90 days the entry into the United States of individual from seven countries—Iraq, Iran, Syria, Libya, Yemen, Somalia and Sudan—has caused quite the commotion.

In addition to nationwide protests, the ban has resulted in a number of lawsuits filed by the ACLU and states challenging the constitutionality of this executive order.

One of these cases, Washington v. Trump, resulted in a nationwide temporary restraining order on President Trump’s Executive Order—a decision that was just unanimously upheld by the Ninth Circuit Court of Appeals.

Given the prevalence of bar exam topics here, we thought we would use this case as an opportunity to review them.

A temporary restraining order (TRO) is a temporary decree issued to preserve the status quo for the period leading up to the hearing on a preliminary injunction and eventually the determination of the merits of the case. A TRO is limited in duration to 14 days and the preliminary injunction hearing must be heard within 10 days of the issuance of the TRO.

The state of Washington argued that its students and faculty being illegally stranded overseas.

The standard for a TRO is imminent and irreparable harm. The state of Washington argued that its students and faculty being illegally stranded overseas, the splitting of their families, restricting their travel, as well as damage to the State’s economy and public universities was irreparable harm. Additionally, the state of Washington argued that Trump’s Executive Order was an Establishment Clause violation because of precedent that establishes such violations as irreparable injury.

In attempting to have the stay lifted, the U.S. government argued that the irreparable harm was the Executive power being upset by the court’s stay (more on this argument below) as well as the risk of terrorists from these seven countries infiltrating the United States.

The third party standing doctrine allows a third party to present the claims of others before a court if there is a close relationship between the plaintiff and the injured third party.

In opposing the TRO, the Government argued that the district court lacked subject matter jurisdiction because the States have no standing to sue.

The state of Washington argued that the Executive Order causes a concrete and particularized injury to their public universities, which are branches of the State under state law. Here is the text from the Ninth Circuit’s decision upholding the stay:

Specifically, the States allege that the teaching and research missions of their universities are harmed by the Executive Order’s effect on their faculty and students who are nationals of the seven affected countries. These students and faculty cannot travel for research, academic collaboration, or for personal reasons, and their families abroad cannot visit. Some have been stranded outside the country, unable to return to the universities at all. The schools cannot consider attractive student candidates and cannot hire faculty from the seven affected countries, which they have done in the past.

Additionally, the Ninth Circuit held that under the “third party standing” doctrine, these injuries give the state of Washington standing to assert the rights of its students, scholars and faculty affected by the Executive Order.

Under the tripartite formula set forth in the steel seizure case (Youngstown Sheet & Tube Co. v. Sawyer), the President’s power is at its apex when he acts pursuant to power given him by Congress; it is lessened if there is no congressional legislation on the matter; and it is at its lowest when he is acting in the face of congressional legislation, affirmatively prohibiting the President from acting.

The Government argued that President Trump’s power here was at its apex, as he was acting pursuant to authority that Congress granted to him in 8 U.S. Code Section 1182(f) that states, “Whenever the President finds that the entry of any aliens or of any class of aliens into the United States would be detrimental to the interests of the United States, he may proclamation, and for such period as he shall deem necessary, suspend the entry of all aliens or any class of aliens as immigrants or nonimmigrants, or impose on the entry of aliens any restrictions he may deem to be appropriate.”

It is the role of the judiciary to interpret the law, including the Constitution, which gives federal courts the authority (and the duty) to review the constitutionality of acts of other branches of the federal government.

The state of Washington, on the other hand, argued that President Trump’s power was at its lowest because he was acting contrary to Section 1152(a)(1)(A) of the Immigration & Nationality Act (INA), which prohibits the discrimination in the issuance of immigrant visas on the basis of race, nationality, place of birth, or place of residence.

Separation of Powers (Reviewability of the Executive Order)

It is the role of the judiciary to interpret the law, including the Constitution, which gives federal courts the authority (and the duty) to review the constitutionality of acts of other branches of the federal government (i.e. statues passed by Congress and executive actions), to declare them unconstitutional and to prohibit their enforcement.

The Government argued that the district court lacked authority to enjoin enforcement of President Trump’s executive order because the President has “unreviewable authority to suspend admission of any class of aliens.”

As the Ninth Circuit pointed out, however, this is very different from arguing that the courts owe substantial deference to the immigration and national security policy determinations of the political branches, which is an uncontroversial principle that is well-grounded in U.S. jurisprudence.

Here, the Government did not contend that President Trump’s Executive Order provided such process, but rather that more or all of the individuals affected by the Executive Order have no rights under the Due Process Clause.

The state of Washington, on the other hand, argued that the Executive Order violated the procedural due process rights of various aliens in three independent ways:

Since the procedural due process protections provided by the Fifth Amendment’s Due Process Clause are not limited to citizens (i.e., Rather, they “appl[y] to all ‘persons’ within the United States, including aliens,” regardless of “whether their presence here is lawful, unlawful, temporary, or permanent.”), the Ninth Circuit agreed with the state of Washington.

The Equal Protection Clause is invoked when a law treats one person or class of persons differently from others, i.e. “no state shall make or enforce any law which shall . . . deny to any person within its jurisdiction the equal protection of the laws.” And while there have been no Supreme Court cases on religious classifications, it is assumed that discrimination based on religion would be reviewed under strict scrutiny.

The Establishment Clause of the First Amendment prohibits any “law respecting an establishment of religion.” Any law that has a religious, not secular purpose, violates this clause as well as any law that officially prefers one religious denomination over another.

Additionally, evidence of purpose beyond the face of the challenged law (e.g., legislative history, circumstantial evidence of intent, statements by decision makers, etc.) may be considered when evaluating a violation of the Equal Protection Clause or Establishment Clause (i.e., “any official action that targets religious conduct for distinctive treatment cannot be shielded by mere compliance with the requirement of facial neutrality.”).

The state of Washington argued that the Executive Order violated the Establishment Clause by pointing to sections 5(b) and 5(e) of the Order.

Upon resumption of the refugee program, section 5(b) of the Executive Order directs the Secretary of State to prioritize refugee claims based on religious persecution where a refugee’s religion is the minority religion in the country of his or her nationality.

Section 5(e) of the Executive Order allow the Secretaries of State and Homeland Security to make case-by-case exceptions to these provisions “when in the national interest.” 82 Fed. Reg. 8,978-80. Section 5(e) states that situations that would be in the national interest include “when the person is a religious minority in his country of nationality facing religious persecution.”

Additionally, the state of Washington argued that the Executive Order violated the Establishment Clause because it was intended to disfavor Muslims, pointing to numerous campaign statements made by President Trump regarding his intention to implement a “Muslim ban ” as well as other evidence they claim suggests that the Executive Order was intended to be that ban (e.g., former New York City Mayor Rudy Giuliani’s statements here).

And there you have it. Hopefully, this post will help engrain these legal concepts in you as you prepare for the bar exam.

This case is obviously just getting started as the TRO is a preliminary ruling designed to preserve the status quo prior to the actual determination of the merits.

If you are interested, you can watch the video of the hearing in the U.S. District Court for the Western District of Washington that resulted in the initial TRO and you can listen to the audio of the oral arguments before the Ninth Circuit that resulted in the unanimous decision to deny the stay.

You can also read the unanimous decision denying stay.