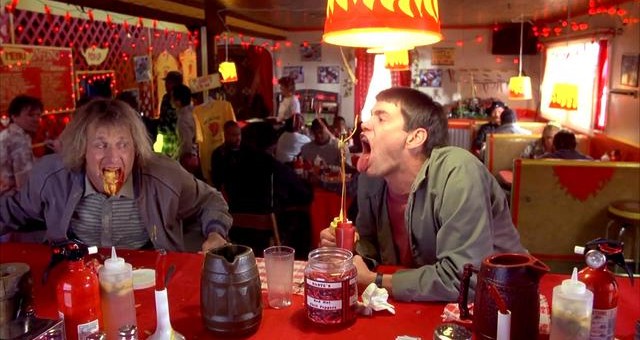 In this week's installment of BarMax Bar Clips, we review the Tort concepts of battery, eggshell skull plaintiff, and proximate cause with a little help from two intellectually challenged best friends - Lloyd Christmas and Harry Dunne.

So let's review, but let's proceed as though this scene was a fact pattern on an actual bar exam essay question and format our response accordingly:

What intentional tort theories can reasonably be asserted on Mr. Mentalino's behalf against Lloyd and Harry and what is the likely outcome? Discuss.

Battery is the (1) intentional infliction of a (2) harmful or offensive contact (3) with victim's person.

Battery requires subjective intent on the part of the actor and this can be either specific intent or general intent.

With specific intent (aka 'hard intent'), the actor acts with the specific purpose of inflicting a harmful or offensive contact.

In this case, Lloyd and Harry clearly acted with the specific purpose of inflicting a harmful or offensive contact on Mr. Mentalino. They intentionally hid the 'atomic peppers' in Mr. Mentalino's burger, knowing full well that he would return to eat his lunch. In fact, both Lloyd ("why don't you eat up and we'll tell you") and Harry ("how's your burger?") encouraged him to eat his burger when he returned to the table.

Therefore, Lloyd and Harry clearly acted with the specific purpose of inflicting a harmful or offensive contact.

'the rule is that the contact for battery can be either direct or indirect. Indirect contact is battery caused by something that was put in motion by the defendant.

In this case, Lloyd and Harry battered Mr. Mentalino with 'atomic peppers' that they put in motion by hiding them in his burger while he was outside on the phone.

Thus, we clearly have indirect contact in this case.

Whether or not a contact is harmful or offensive is determined according to an objective, reasonable person standard (i.e. 'offends a reasonable sense of personal dignity').

In this case, it seems pretty clear that hiding atomic peppers from Dante's Inferno: The Hottest Food East of the Mississippi in someone's burger would be harmful and offensive to a reasonable person. Furthermore, Lloyd and Harry had tried the atomic peppers right before they hid the peppers in Mr. Mentalino's burger and their experience clearly made them aware that the eating these peppers would be harmful and/or offensive.

Therefore, we have harmful or offensive contact in this case.

Lack of Consent from Reasonable Person

However, even if a reasonable person would not find 'atomic peppers' harmful or offensive contact, any contact can be offensive if there is a lack of consent.

In this case, Lloyd and Harry initially asked Mr. Mentalino if he would like an 'atomic pepper' and he politely refused, making Lloyd and Harry aware that Mr. Mentalino did not want to eat these peppers. Furthermore, atomic peppers would not be considered ordinary contacts of everyday life so the exception of implied consent for ordinary contacts of everyday life would not apply either.

Therefore, since Mr. Mentalino did not consent and there is no implied consent (i.e. it was not an ordinary contact of everyday life), hiding the 'atomic peppers' in his burger would be an offensive contact.

The rule is that the harmful or offensive contact must be with victim's person, which includes anything the victim is holding, touching or connected to.

In this case, the contact was with Mr. Mentalino's mouth and digestive tract.

Therefore, we clearly have contact with the victim's person in this case.

The rule is that the battery (i.e. harmful or offensive contact) must be the cause of the victim's injuries.

"Actual cause (i.e. cause in fact) is determined by the 'but-for' test" i.e. but for the defendant's intentional tort, the plaintiff would not have been injured.

In this case, Mr. Mentalino would not have been injured but for the battery committed by Lloyd and Harry (i.e. he would not have had the adverse reaction that urgently required his ulcer pills and also prevented him from self-administering this medication).

The doctrine of proximate cause, however, is the philosophical connection, which limits liability to consequences that bear some reasonable relationship to the defendant's conduct so as to not offend notions of common sense, justice and logic.

Proximate cause requires that the harm suffered by the plaintiff was foreseeable at the time the defendant acted.

In this case, Mr. Mentalino had a medical condition that clearly exacerbated his reaction to the atomic peppers.

However, since this is a personal injury case, Lloyd and Harry took Mr. Mentalino as they found him and, as such, they are liable for all injuries he suffered as a result of their battery unless there is an unforeseeable intervening cause that worsened Mr. Mentalino's injuries.

In this case, we clearly have a battery of Mr. Mentalino by Lloyd and Harry.

Therefore, Lloyd and Harry cannot be found liable for the death of Mr. Mentalino under the intentional tort of battery, but they are liable for all injuries suffered by Mr. Mentalino prior to the fatal dose of rat poison.

Please note that we cannot say for sure how a court would actually treat the rat poison because we need more information (i.e. would Mr. Mentalino still have died had he been administered his ulcer pills as opposed to the rat poison at that moment?). However, this is completely irrelevant for bar exam purposes. We have stated the rule, we have applied the rule to the facts of the specific case and we have drawn a reasonable conclusion. Done and done!

Please also note that we have only discussed Lloyd and Harry's liability under intentional tort theories. What about a claim brought against Harry and Lloyd for negligence since they administered rat poison instead of the ulcer medication? We will let you think through that question on your own, but keep in mind that the standard of care in emergency situations is different from the standard of care required under normal circumstances.

In the meantime, if you stumble across any movie clips that make you think of the bar exam, please email us at info@testmaxprep.com.

Now, get back to that bar prep!