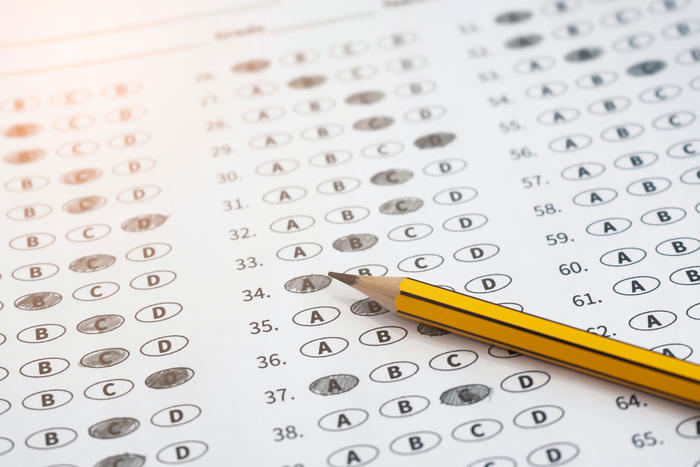 An alternative test format for the traditional format of the LSAT, the LSAT Flex was used widely throughout 2020 and 2021. This remote test gave test-takers the flexibility of taking the test from the comfort of their homes while still having the process proctored and secure. However, the scoring of the LSAT Flex does differ from the traditional LSAT, and this is something that can be confusing for many test-takers.

In this article, we will give you an overview of the LSAT Flex test and how it differs from the traditional LSAT. Then, we will discuss how the LSAT Flex is scored, as well as provide some simple score conversions so you can estimate your overall score.

What Is the LSAT Flex?

The LSAT Flex was pioneered starting in April of 2020 and is the remote version of the traditional LSAT test. This test allowed extra flexibility for test-takers, all while still offering secured testing conditions through a system called ProctorU. This system requires students to perform a room scan of their test-taking environment, in addition to other security measures, to ensure that there is no cheating or outside help being given during the exam. Basically, it makes sure that secure test-taking conditions are present, even when students are taking the test at home.

After the 2021 LSAT administrations, an extra, unscored section was added to the LSAT Flex, as is typical with the traditional LSAT. This increased how long it takes to complete the LSAT Flex, but it does not affect how it is scored.

Unlike the traditional LSAT, the LSAT Flex only has three sections that are scored. This means that instead of the sections being weighted differently, each of the three sections is weighted the same. Check our chart for a comparison of scoring percentages for both tests below.

Additionally, you can estimate your LSAT Flex score by calculating how many questions you got correct and comparing them to an LSAT score chart. The LSAT Flex typically has 75 to 76 questions, which means a perfect score of 180 can come from getting all 75 to 76 questions correct. However, the LSAT Flex is also scored on a relatively steeper curve than the traditional LSAT, which means that you could score 73 questions correct and still receive a 180 depending on the circumstances.

Below, we give you a chart to review so you can see how your LSAT Flex score may convert to a traditional LSAT score. Keep in mind that this is just a sample and that your LSAT Flex test may have more or fewer questions on it, changing the layout of the scores slightly; it won’t vary too much from the following base scores, though.

Your exact score will depend on how many questions your LSAT Flex test has and the overall curve of the test.

Additionally, the June 2022 administration of the LSAT Flex will include a fourth, unscored section to test out new questions. This is typical practice with the traditional LSAT but had been left out in previous years as the LSAT Flex was relatively new. However, because this fourth section is still unscored, you can expect your LSAT Flex score to be based on how many questions you answer correctly out of the three sections on the test.

The LSAT is already a difficult task to undertake and understanding your score for the LSAT Flex, a totally new way of testing, can make this process even more stressful. Fortunately, you don’t need to worry too much about estimating the score of your LSAT Flex thanks to our article on score conversions.

Simply add up how many questions you get correct out of three sections on the LSAT (one analytical reasoning, one logical reasoning, and one reading comprehension) and then use the chart above to estimate your score based on the raw number score.

By taking time to estimate your score after practice tests, you can study more efficiently and work towards getting the LSAT score you want.