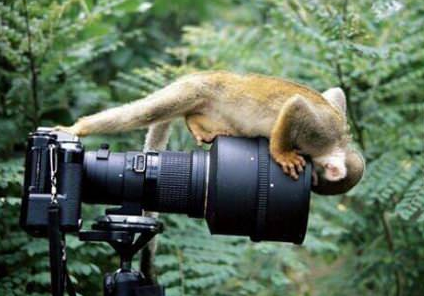 Today, let’s take a few steps forward into the golden time that your LSAT prep is over and you are in the law school of your dreams. Throughout your three years in law school you will take various classes on the topic of Property Rights. In these classes you will most likely be introduced to copyright law. You should know that copyright is a property right. Just because you purchase a photograph, does not mean you have purchased the copyright. Under the Federal Copyright Act of 1976, photographs are protected by copyright from the moment of creation.

Seems simple enough, right? Well, in this day and age, with social media photo sharing rampant and privacy being almost a foreign concept, the rights that go along with photographs have become ever so muddied. Recently a nature photographer, David Slater, has come face to face with the ambiguities that are rife in photographic copyright law.

Slater was taking photographs of a group of crested black macaques in an Indonesian forest in 2011. One of the macaques grabbed his camera and began to take photos. One of the photos ended up being an amazing “selfie” that has since become somewhat notorious for all the trouble it’s caused.

The picture, since being captured by the macaque, appeared on Wikimedia Commons, a collection of images that are free for public use. Wikimedia determined that since the monkey took the shot—and monkeys cannot hold copyright—the image belongs in the public domain. Slater disagrees, stating that if he were to have an assistant, the law would consider him to hold the copyright. Slater claims that he has lost tens of thousands of dollars in revenue due to the photograph being in the public domain.

A lot of interesting questions are being raised from this debacle. Slater states that he set up the camera and remote shutter release. Is that sufficient effort to constitute having taken the photo? Or does the fact that the macaque pressed the shutter mean that the monkey took a “selfie,” rendering the copyright null void and open to the public?

The case will probably even go to trial by the time you make it to law school! So you may just get to discuss the implications of all of this while you sit in a lecture hall at the school of your dreams. So, with that in mind, keep up your LSAT prep so that you can get your goal LSAT score, opening your path to whatever law school you’d like to go to!