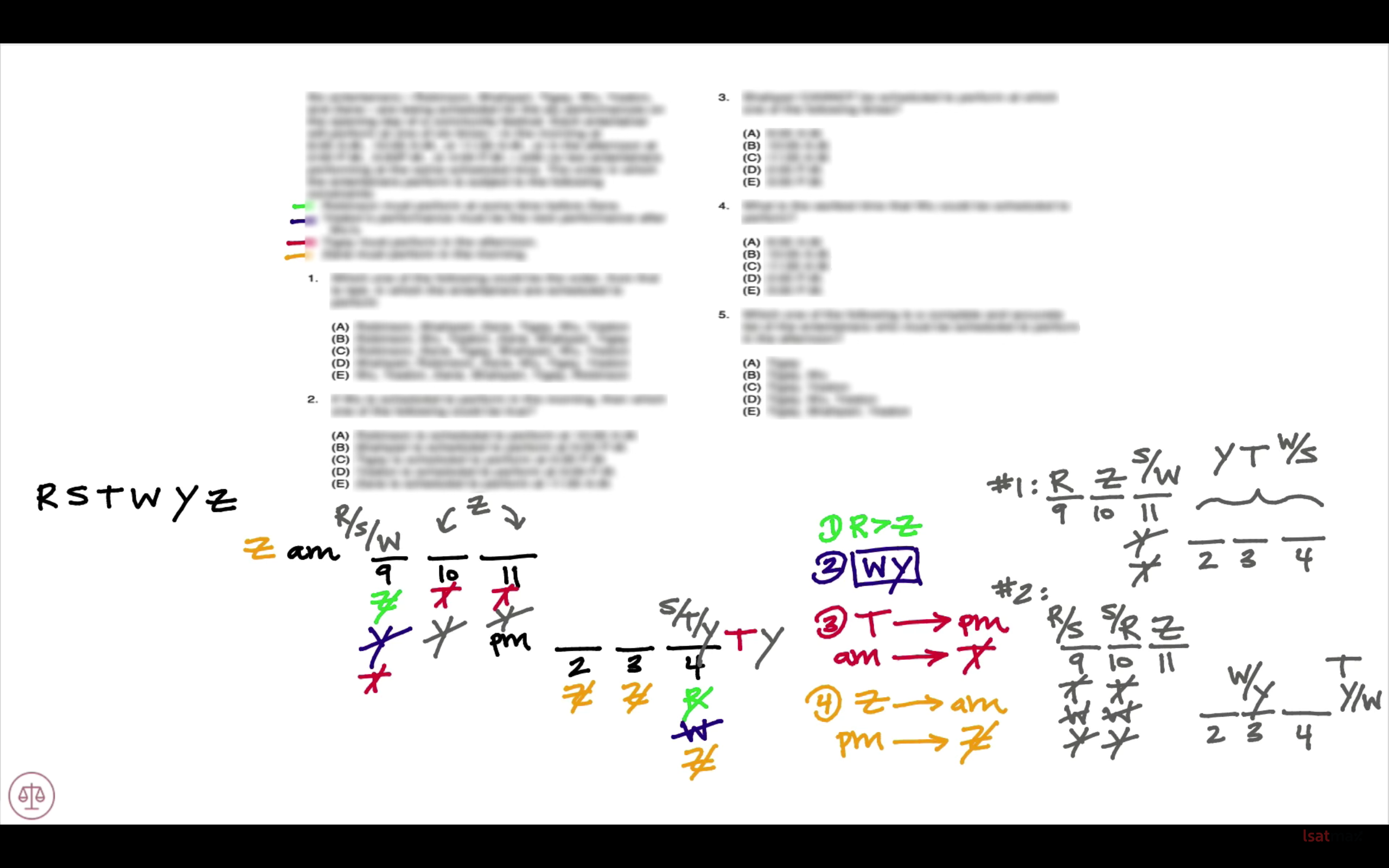 For our LSAT prep today, we are going to go over the setup for the first game of the December 2015 LSAT exam which states: “

We have somewhat of a strange setup here. It's a linear game, but notice that while obviously in sequential order, 9 AM, 10 AM, 11 AM, 2 PM, 3 PM, 4 PM, we obviously have a gap there between 11 AM and 2 PM and we obviously need to distinguish between the morning and the afternoon.

So with that in mind, let's turn our attention to the constraints:

Our second rule states that, “Yeaton's performance must be the next performance after Wu's.” We know that we're going to have Wu followed by Yeaton. We have this block that is now established. Notice this block tells us that Y cannot be first and similarly that W cannot be last.

Another very important thing to note is that we have eliminated Z from all but two possibilities. Z can only appear 10 or 11. Given that that is very restrictive, we're going to want to draw out the possibilities.

Turning our attention here to the right, let's try out these different scenarios. First, I'm going to place Z in 10 AM. The first rule tells us that R must come before Z, so that means R must be 9 AM. Now, we know that Y cannot appear before W, so Y cannot be in the 11 slot, which means now the only possibilities remaining here for that position because we know again T can't be in the morning, so T is eliminated from 11 AM. The only two possibilities here are S and W, which tells me that in our afternoon positions, we're going to have Y, T, and the reverse of W and S. You notice placing Z in 10 AM gives us a very nice scenario here. Obviously we can't draw it out completely, but we do have a nice sense of what's taking place.

We also know now that one of those other positions is going to be the reverse of W and Y and then T. What we have here is T and then the opposite of W and Y left to place. That tells me that the remaining variables R and S must appear in the morning. The order is not relevant. We just know that R has to come before Z. That is going to occur in either scenario here.

Now that we have our setup, our deductions, let's turn our attention to the questions.