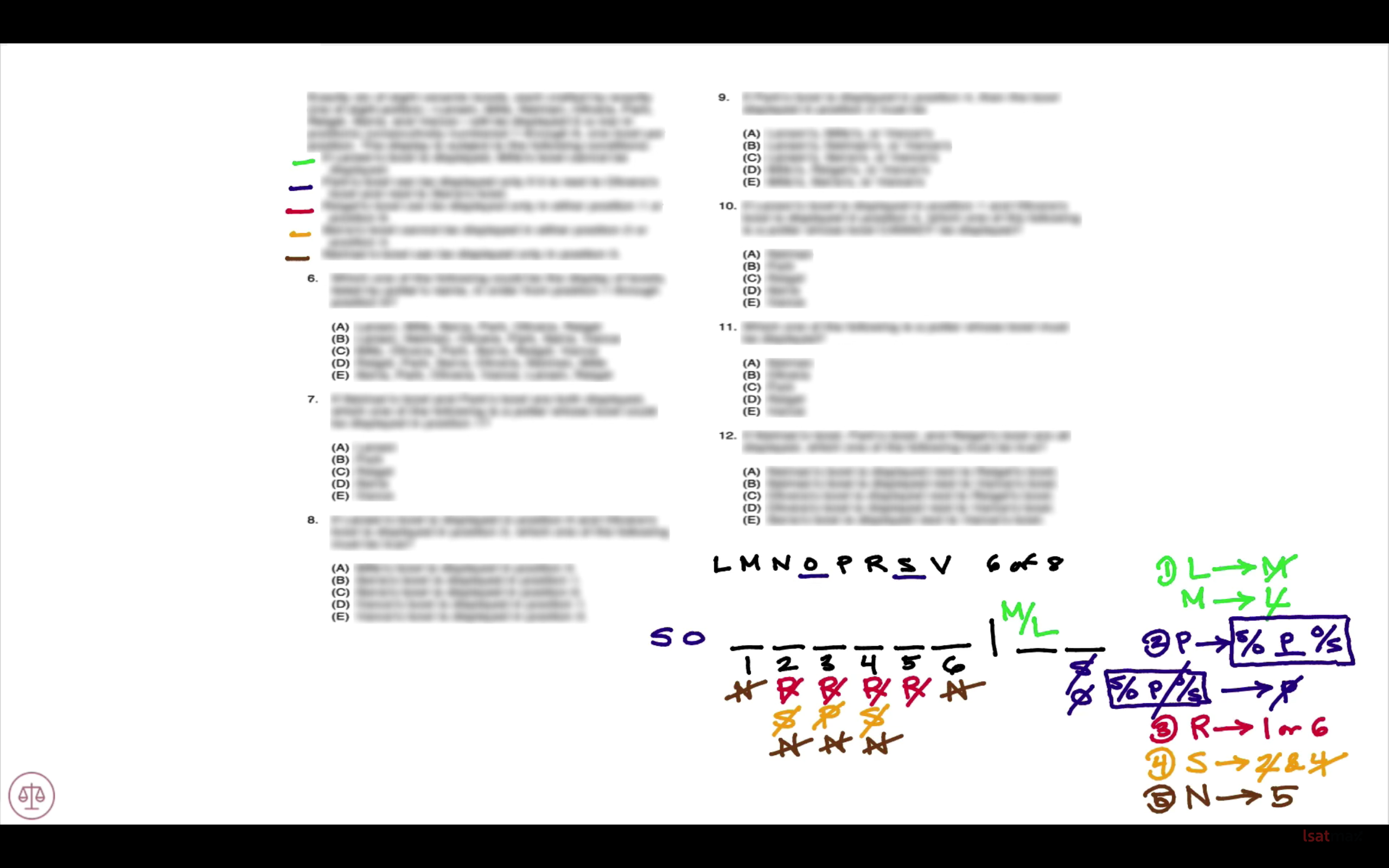 For our LSAT prep today, we will go over the second game of the December 2015 LSAT, which states:

“Exactly six of eight ceramic bowls, each crafted by exactly one of eight potters—Larsen, Mills, Neiman, Olivera, Park, Reigel, Serra, and Vance—will be displayed in a row in positions consecutively numbered 1 through 6, one bowl per position.”

Okay, so first let's draw out our base. We know that we are selecting 6 of 8 variables, and our variables are L, M, N, O, P, R, S, and V, and again, we are picking 6 of 8. We are going to line up the 6 that we select in sequential order, numbered 1 through 6, so that would be our “IN” group and then we have our “OUT” group, the two variables that are not going to be selected. So this is an IN/OUT game with sequencing, so it's actually a Hybrid Game.

Now that we have our base, lets turn our attention to the conditions. The first condition states, "If Larson's bowl is displayed, Mill's bowl cannot be displayed." We know if we have Larson, then Mills is out. Contrapositive, if we have Mills, Larson is out. That leads to a deduction here. We know that there are a number of possibilities, either L is in, M is out, M is in, L is out, or both M and L are out, which means we can conclude, for sure, that one of M or L is missing. We know one of M or L is out, possibly both, and again, that's because the first condition, here, is a “Not Both” rule.

Turning our attention to the second condition, which states, "Park's bowl can be displayed only if it is next to Olivera's bowl, and next to Serra's bowl." If Park is in, we're going to have this block, where P is sandwiched by S and O. The contrapositive would be if we do not have this block, P is out.

There's a very important deduction to be made here. Notice what happens if S were out, or if O were out. Let's just place S out. If S is out, we know, now, who the two variables who are absent are. One of M or L and S, which means that P must be in. If P is in, we need both S and O to be present. S cannot be out. Same exact logic applies to O. If O is out, we know P is in, and if P is in, we need both S and O, but O is out, so that tells us that O can't be out either. That leads to a huge deduction, here, that S and O must be selected.

Turning our attention to the third condition, which tells us, "Reigel's bowl can be displayed only in either position 1 or position 6." We know that Reigel is either going to be in 1 or 6, which means Reigel can't be second, third, fourth, or fifth.

Moving on to the fourth condition, "Serra's bowl cannot be displayed in either position 2 or 4," so we know that means if we have Serra, Serra can't be in 2 and it cannot be in 4. Serra's not going to be in 2, not going to be in 4, which tells us that P cannot appear third, because notice if P was third, we would have to have S appear in either second or fourth, and that would violate the fourth condition, so P can't be third.

Our last condition, here, "Neiman's bowl can be displayed only in position 5," so we know that if we have Neiman present, Neiman is fifth. That tells us that N can't be first, second, third, fourth or sixth. That would be the setup for this game. Now again, the key deduction, here, that S and O must be present. If you're unable to make that deduction, not a huge deal, here, because as you will see, you're still able to progress through the game and actually, as you arrive at Question 11, you're going to be forced to make this deduction, if you haven't made it, already.

Now that we have our setup and we have our deductions, let's turn our attention to the questions.