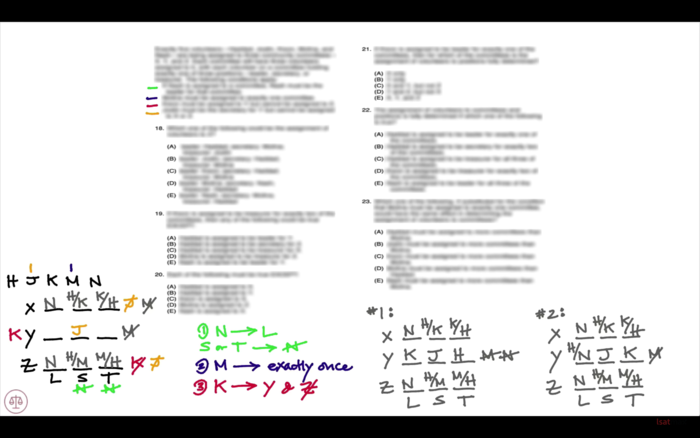 For our LSAT prep today, we are going to review the fourth and final game of the December 2015 LSAT exam which states, “Exactly five volunteers—Haddad, Joslin, Kwon, Molina, and Nash—are being assigned to three community committees—X, Y, and Z. Each committee will have three volunteers assigned to it, with each volunteer on a committee holding exactly one of three positions—leader, secretary, or treasurer.”

Turning my attention here to committee Y, which is the only one that we haven't filled out completely, notice that we must place Kwon still, which mean Kwon is either going to be the leader or Kwon is going to be the treasurer. Let's draw out these two scenarios here just to make sure we have them clear. Placing what we already know in scenario one, now I'm going to place K as the leader for Y. If K is the leader for Y, now again we know M is not going to be present, but we also know now that N can't be present because the only spot open is treasurer and with treasurer, we know it can't be N. That means N is out, so the only possibility that exists in this scenario for treasurer for committee Y is H.

Drawing out our second possibility here now where we're going to place Kwon as the treasurer in Y. Again, placing what we already know, now Kwon will be the treasurer for Y, which means the only possibilities that now exist, we know M is not going to be present, so it must be H or N, either of which is possible.

You notice here this is a GURU game. We are able to draw out all of the possible scenarios here. Now that we've done this, this game will be a breeze. Let's turn our attention to the questions.