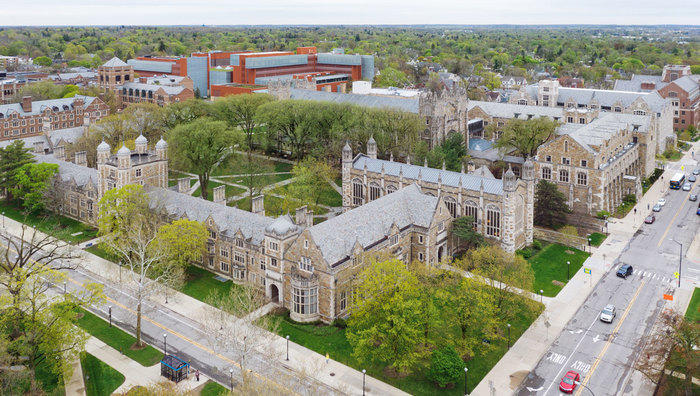 Are you looking to study in one of Michigan’s leading law schools? If your answer is yes, then you are in the right place.

On top of having a wealth of natural resources and expansive forest cover, Michigan is also home to some of the best law schools in the country. The presence of several top-rated and ABA-accredited law schools makes it fairly hard for students to select the best school. Worry not—that is where we come in!

Today, we’ll analyze four of the best law schools in Michigan based on bar passage rates, graduate employment, and even the institution acceptance rate.

Located in Ann Arbor, the University of Michigan (UM) Law School is regarded as one of America’s top law schools. It is ranked 8th in the US by the US News & World Report.

The school’s faculty is made up of 72 full-time professors and 42 adjunct professors.

To secure a spot in UM Law, you will need to have high GPA and LSAT scores. In the most recent round of admissions, for instance, the median LSAT stood at 168, while the median GPA was 3.76. Here’s the worst part though, the University of Michigan Law School has a mean acceptance rate of 28%. That low acceptance rate means that you will need high scores for your application to succeed.

Another positive thing about the University of Michigan Law is its impressive student to faculty ratio of 10:1. The school provides on-campus housing, graduate housing, and law-specific housing.

In terms of bar passage rates, very few law schools in Michigan can compete with UM Law. The school registered a bar passage rate of 93.3%, while 82.7% of graduates were employed within the first ten months after graduation.

The University of Detroit Mercy (UDM) School of Law is located in Detroit and is among the most established catholic law schools in the US. UDM law is also a member of the Association of American Law Schools and is also accredited by the ABA.

The school has an acceptance rate of 61%, which means they accepted slightly more than half the applicants. Since it is a catholic-based institution, having a robust catholic background can come in handy when applying.

Accepted applicants had a median LSAT of 151, while the median GPA is 3.11. The law school claims that on top of putting weight on the test scores, it also considers the personal statement as a determining factor in applications. You want to have an outstanding personal statement to back up your scores during application.

UDM law does not provide on-campus, graduate, or law-specific housing. The student-to-faculty ratio is not too impressive as it stands at 21: 1. This means that students might struggle to interact or develop academic relations with relevant faculty members.

An impressive 82% of graduates landed jobs within the first ten months after graduating. The bar passage rate in 2018 stood at 67.8% compared to the state average of 69.5%.

Michigan State University (MSU) College of Law was opened in 1891 and is among the oldest law schools in the state. MSU law is a member of the Association of American Law Schools, and it also ABA-accredited, meaning once you secure admission, you will graduate practice-ready.

The US News and World Report ranked MSU as the 100th best law school in the US The school has a student to faculty ratio of 15:1, which is favorable for students looking to engage professors further.

The school provides both on-campus housing and graduate housing but does not offer law-specific housing.

In 2018, the Median LSAT stood at 154, while the Median GPA was 3.46. Due to its high rankings, securing admission to MSU law is no walk in the park. MSU law’s acceptance rate of 47% makes it among the most difficult law schools to secure admission to in Michigan.

The school also recorded an impressive bar passage rate of 79.6%, with 71.8% of graduates secured jobs within the first ten months since graduating.

The Thomas M. Cooley Law School is in Lansing and holds the record for the largest law school or institution in the US. Unlike most law schools that are affiliated with Universities, Cooley is privately owned, run, and managed.

The school opened in 1972 and is ABA-accredited. However, the school is not a member of the Association of America’s Law Schools. It has one of the friendliest acceptance rates in the state, having accepted 88% of its 2018 applications. The median LSAT for the last admission was 141, while the median GPA was 2.85.

Cooley Law has 47 full-time professors, and 157 professors are contracted on a part-time basis. The school provides on-campus housing as well as graduate housing.

The school’s bar passage rates stand at 52%, which is significantly lower than the average state rate. However, despite the low bar passage rates, 71.1% of Cooley Law’s 2018 graduates secured jobs within the first ten months after graduation.

Now that we have discussed four of the leading ABA-accredited law schools in Michigan, you should be well-placed to make a decision that best suits you and your academic needs.

Of course, it’s only natural to desire to secure admission to top schools like the University of Michigan Law School. However, with the high demands and immense competition for slots, it is advisable to apply only if your scores are competitive enough.

The Thomas Cooley Law School has among the friendliest acceptance rates, which means that you should consider applying if your scores are not as competitive as you would like.

When applying to the law school of your choice in Michigan, be sure to check on factors such as housing, bar passage rates, and employment rates to ensure that you are well placed to land a job once you graduate. Failure to consider such factors might leave you left with a worthless degree, especially if you apply to schools that are not ABA-accredited.