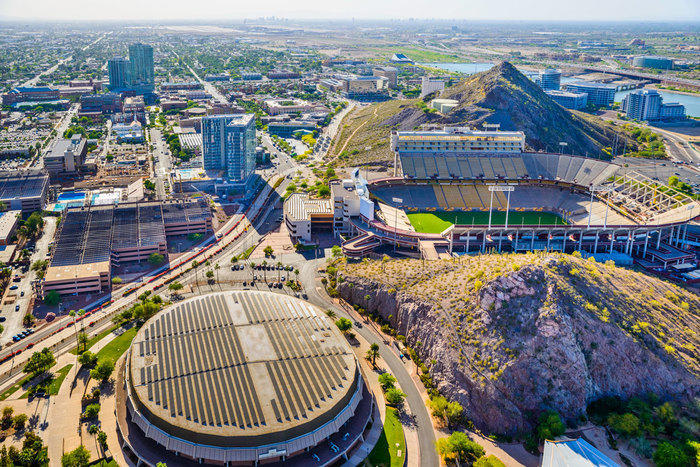 Arizona, in the Southwestern region of the United States, is a wonderful state to live in. It boasts beautiful desert landscapes, breathtaking mountain peaks, and crystal-clear waters. Who wouldn’t want to study law in a place packed with adventure and stunning sights?

The Grand Canyon State is home to three law schools, two of which are accredited by the American Bar Association (ABA). Let’s take a detailed look at the law schools:

Established in 1965, Sandra Day O’Connor College of Law is a highly rated public law school located in Tempe, AZ. The school is also known as the Arizona State University College of Law. It received its accreditation in 1969.

It is ranked the 26th best law school in the United States by the U.S. News and World Report. Moreover, it is on the list of top ten ABA-accredited law schools west of the Mississippi. It holds both the Order of the Coif and the Association of American Law Schools memberships.

The school offers at least 150 courses every year for students looking to become lawyers. It also has personalized, flexible Master of Legal studies programs. These programs fit professionals who want basic knowledge in the field of law but aren’t interested in practicing law.

Additionally, the school has 13 clinics. These clinics allow students to gain hands-on experience by working with people who have real legal problems. The clinics include:

The school’s admission is highly competitive. It accepts only about 26 percent of its applicants. Fortunately, you have a high chance of getting employed once you complete your studies.

According to the college’s official American Bar Association-required disclosures, at least 88 percent of the 2017 graduates acquired full-time, J.D.-required employment within nine months of graduating.

James E. Rogers College of Law, established in 1915, is at the University of Arizona in Tucson, Arizona. That makes it the first law school to open in the state.  The school takes pride in offering students the benefits of an exceptionally relaxed environment that is the Southwest.

The University of Arizona College of Law is much more expensive than Arizona State University, although it is much smaller and ranks lower. Its small size makes it a great option if you’re looking for a more intimate educational experience.

The college is listed as the 39th best law school in the country in 2019 by the US. News. With an acceptance rate of about 40 percent, the college enrolls about 150 law students every academic year.

It offers a variety of programs, which include:

About 87 percent of college graduates pass the bar exam the first time around. For those who get accepted into the school and finally graduate, employment prospects look promising. According to the college’s 2017 ABA-required disclosures, a little more than 84 percent of the year 2017 graduates acquired full-time, J.D.-required employment within nine months of graduating.

Located in Phoenix, Arizona, Summit Law School opened its doors in 2005. It received its ABA-accreditation in 2010. It is one of the InfiLaw System law schools owned and operated by Sterling Partners.

The school’s original name was Phoenix School of Law. It changed its name in an attempt to reinvigorate its branding. Unfortunately, the school has been facing financial challenges in recent years.

The financial problems resulted in the ABA withdrawing its accreditation on July 9, 2018. The school started to wind up its operations in the fall of the same year. According to the schools’ official ABA-required disclosures, only 34 percent of the Class of 2017 acquired full-time, J.D.-required employment within nine months of graduating.

It also has one of the lowest passage rates despite charging the highest tuition fees in the state. For these reasons, Arizona Summit Law School is generally not a favorable school at which to study law.

Choosing the right law school is the first step to building a successful career in the legal industry. If you’re looking to study law in Arizona, this article will help you choose the most suitable law school.